The Huaraca, or sling, is one of the most practical and fascinatingly subtle textiles in all of the Andes. From commanding attention, to herding, gaming, dancing, and fighting, the Huaraca is an essential tool of those who live on this land.

The first Huaraca I encountered was offered by a small boy on the slopes of Ausangate, a source mountain of the Inca. The maker had braided his rope with the natural wool of the alpaca in white, brown, and black commonly occurring shades.

In the Andes, the Huaraca is used as a rope, tying pieces of cloth together or lashing gifts of the land to a human llama, for their transportation. A skilled handler, through an extremely quick motion, can make the Huaraca snap or crack near the ground. This is to get the attention of the animals or to make a textile call to a neighbor.

ALCHEMY OF STONE AND CLOTH

When combined with a stone, the Huaraca's impact is greatly amplified. A pocket braided into the rope serves to safely nest a stone in the middle of the Huaraca. A stone, so nestled, can be twirled above the handler's head, swinging the extended rope around and around. At just the right moment, one end of the Huaraca is released (the other end often has a woven eye for the handler's finger), flinging the stone toward the lead animal and thus directing the herd.

When my sons both procured their own Huaraca, they naturally wanted to propel rocks into the air with them. During that memorable hike, never had the alpaca been so safe, and the fellow hikers been so much in danger! After a time, however, the boys learned the swing and its throw and became quite proficient in the art.

On a more recent journey to the ancestral lands of the Q'ero, I offered Huaracas to the shaman and to the horse handlers. Each one had his own special way of twirling, whipping, and sending stones hurtling in the air with athletic motions of the arm and masterful snaps of the wrist - all accompanied by the delight and laughter of the men, and the cringing faces of all around.

On a mythical level, the Huaraca is used in dancing as an extension of flowing body movements. Don Francisco has also shown me a type of aggressive dance where the partners take turn swinging their Huaraca with the intent of catching the legs of the opponent and causing some pain, while the participants show sly grins and abundant laughter.

Finally, the herder can protect himself and the herd from hungry predators or mischevious deeds. There are stories of the first Spanish who, armed with  uns, came up against expert Incan Huaraca Warriors, sure in every throw they made, but no match for the propulsive power of gunpowder.

SYMBOLS OF THE BRAID

The secret gift of the Huaraca is the patterns that are braided along the length and within the pocket of this versatile cloth. These patterns talk of the mountains, rivers, and wind, the trail and the weather - they show the life of the alpaca and llama herder, and the gritty nature of these mountain communities as a whole.

Nilda Alvarez is a Weaving advocate who recognizes the art of cloth; the expression and cohesion it implies for each community. As an accomplished weaver, herself, she has been instrumental recognizing and bringing forth traditional patterns, natural dyes, and the quality of these mountain communities' woven and braided arts. She has written about the importance of weaving to the communities and the very practical and mythic place cloth plays. She's a symbolist of great renown and has written extensively on the subject.

I had collected a Huaraca from a weaver beside the trail during our hike on Ausangate. I showed the woven pattern to Nilda and asked if she had ever seen it before - it was new to her, she stated. The braider had told me that what was depicted was the trail, itself, up Ausangate. The Inka Trail, braided in natural alpaca fiber.

This inspired me to support the Huaraca Project. The Project recognizes the elder weavers who remember the old Huaraca patterns. They are encouraged to share their knowledge with younger weavers, male and female. An unrecognized and dying art is being seen, revitalized, and shared.

All proceeds from the sales of these Huaracas goes directly to the weaving communities to promote preservation and enhancement of this most beautiful and practical art. 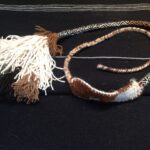