Use by the Shaman

Many Andean shaman use the Four Quartered cloth as an inner or ancillary cloth to the mesa, or personal medicine bundle.  In such use, the Four Quarters provide a resting place for the kuyas, or medicine stones; a place of potential from which the manifested world is symbolically formed.

These cloths are used throughout the Q’ero world as a traveling altar, depicting an honoring of and request to Pachamama to provide abundance and “ayni”, sacred reciprocity, to the individual, the family, and community, and to the world at large.  The altar-designer honors the world and thereby receives Pachamama’s natural gifts directed to meet the expressed intention.

By lore, each time the shaman opens the mesa or medicine cloth, the world is organized anew.  Depending on the intention of the creator, this symbolic universe can have very personal to wide-ranging impact.

These Tauantinsuyu cloths are known for their effectiveness not only in envisioning the future, but also in the divinatory aspect of showing representations of the present, as well as energetic tendencies woven within the fabric of time.  Synchronous relationships are depicted by using figures in the form of natural materials like leaves, stones, or other small, natural materials upon the universe (the ground) of the Four-Quartered cloth.  The presence or absence of energy and the flow or form of design speak of relationship and meaning.

The basic formation of the Andean world was conceptualized in four quarters, known as the “Tawantinsuyu”. This “four parts together” represents the whole of the land, organization, and spiritual manifestation of the Inca experience.

The four quarters are still known as:

Although during the greatest flourishing of the Inca Empire these named areas stretched far beyond the features specifically mentioned above, the sites named within each area represent an energetic signature of the suyu region; each of the four signatures necessary to comprise the whole and completion of the Inca expression itself.

The Antisuyu is known as the wild, untamed part of the realm.  The Collasuyu is the mythological origin place of the Inca (from the Quechua “Enqa”, signifying energy); therefore the term Inca describes people of living energy. The Cuntisuyu is a wide-open coastal and desert region, home of the Nasca lines (ground images that can only be perceived from the air) and the Paracas textiles depicting beings with soaring wings.  Finally, the Chinchaysuyu, home of many sacred sites and final expression of the Inca represents the energetic exclamation point of this particular human experience.

By accessing the depth and complexity of this textile template, we can deepen our understanding of and manifestation within the totality of our personal world.  These masters of living energy can teach and guide us today. 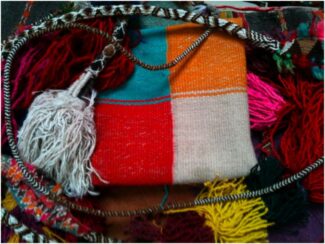