Invite a Rainbow into your Mesa

We present the newly crafted Mini Rainbow Chumpi stone set: Kuichi Chumpi. In Quechuan, language of the Q’ero, “Kuichi” is the term for rainbow and “Chumpi” refers to lines and belts of energy that are attracted to and emanate from each stone. This new Chumpi Ayllu (Spiritual Community)  is hand carved in Cusco by master stone crafter, Arturo.

As the first mini rainbow stone set of its kind, it finds inspiration from the Q’ero shamans, spiritual advisors to the Inka, and their rainbow banner. The rainbow is, in fact, the comprehensive symbol of our spiritual inheritance. These rainbow stones also trace our personal energy journey from the first through the seventh chakras, from red to violet. They have the potential to energize our rainbow body and open the portals within our luminous field.

Through hands-on experimentation, you’ll discover your own uses for this Rainbow Chumpi family; a perfect companion for and amplification of the Mesa’s energies. 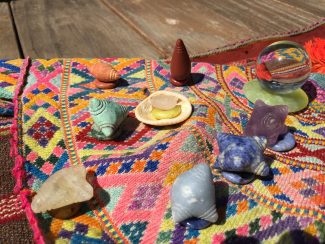 These Chumpi stones were each sourced within the Peruvian Andes:

Rainbow Chumpis are Star Stones. By Andean lore, each Chumpi point is related to a mountain peak, and each peak, tied to a star. The Rainbow Chumpis, then, point to the stars, their origin place and connecting point. Luminous threads naturally collect and spread from every peak.

You’ll notice that each Chumpi point is ringed by three carved lines. These carvings represent the lower, middle, and upper worlds of the Q’ero Cosmology: the Uhupacha, Kaypacha, and Hanaqpacha, respectively. These rings also stand for our states of being: love, wisdom, and service: Munay, Yachay, and Llanky. 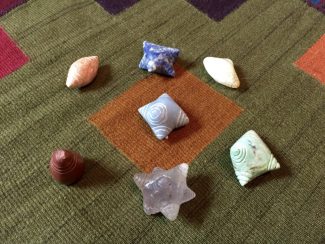 Enliven the Q’ero Cosmology that is already living within your Sacred Bundle.By bringing a rainbow into your mesa, you enliven the vibrations of each color, shape, and realms they represent.

Each handcrafted Kuichi Chumpi has its own, unique texture. Handling these stones is like holding the Andes in your hands.

When I asked, “what are the uses of the Chumpi”, I was told: “only for offering the Bands.” When I heard that answer, I knew there was more.

To me and to a growing circle of mesa stewards, these Chumpi Stones are mystical keys to the essentials of Q’ero  Cosmology. They unlock the secrets of the Inka, true Living Energy Masters. They are vibrational tools and iconic means to unravel the mysteries of indigenous belief and experience.

In my visits to the Andes and inquiries about these stones, I have found that venders invariably refer to the points of the Chumpis as connected to the peaks of sacred apus, or mountains. Since the mountains are known to be repositories of ancestral wisdom, these stones hold the experience and knowledge of the ages.

Many of these stone sets have three rings carved on each tip, representing the three worlds of Creation: the lower (Uhupacha), middle (Kaypacha), and upper (Hanaqpacha). Thus all wisdom gleaned from Chumpi Stone use has the potential to apply to the hidden realms and our past, the present moment, and to the future of visions and dreams.

I have found the most profound application of the Chumpis to my mesa work within a seven stone set. The first stone is crafted with one point, the second, two, and onward through the seven. In this way, they correspond not only with the seven rainbow colors  of the Inka flag, but also with our own personal energy portals or  chakras. 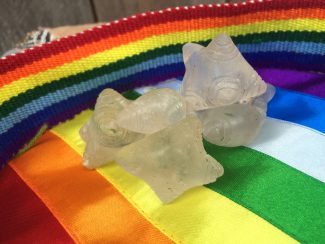 In future submissions I intend to speak of the archetypes associated with each stone and explore aspects of the indigenous cosmology to  which these Chumpis refer. In the meantime, I invite you to engage in Chumpi experimentation and open yourself to the indigenous world that lives within.

Chumpi Stones can easily become an essential component of each mesa.  These are ancient energy tools, carved from stones of many varieties, and crafted in sets most typically of 5 to 7 stones each.

The Stone Worker from Loren Edward Wheeler on Vimeo.

Country flags have political aspirations. They are meant to inspire and unify in relation to a political form.  The reason they have deeper impact, however, is the mythic symbology as an underlying, spiritual core.

The flag on Peru is formed from two colors: red and white. This national banner consists of two vertical bands of red, bordering a central stripe of white.  Symbolically, these colors represent the deep, natural experience of the Andean people.  Those from the Andes live close to the earth as farmers, herders, and weavers; they are of Pachamama.

To the people of the Andes, therefore, the red color of their flag embodies the red road all people walk upon this earth. We are born with the blood of creation, we walk a path traced along Pachamama’s belly, and we come to our final steps when the swirling circulation within us ceases to move. Our road comes to a halt, but the road of the Ayllu continues.

The white band at the core of Peruvian flag is the path of Pachamama, navigating the celestial firmament. This is the path of the stars that accompany the earth on its journey, and forms the ‘Wilka Mayu’, the Milky Way. This star studded pathway in the sky contains our great Ayllu, our precious earth, as it hurtles through the cosmos.

The Peruvian flag, therefore, is overtly political, yet inwardly woven with the threads of Spirit. Our individual and collective journey is expressed in these forms. Our terrestrial and celestial pathways are here inscribed. Our sense of mutual journey, our shared quest, is the woven language of this mythic form.

Motion is woven into Andean cloth.

The Q’ero, shamans of the high Andes, are weavers of energy patterns.

These depicted figures represent the breath of Creation. The dark bordered image is the in-breath; the image bordered in white is the out-breath. Together they are life and describe a natural process.

In the cloth, both dualities are happening at once – we are not only naturally collecting energy from all around us, but we are also projecting who we are into the world. There is an absorptive quality of our being, combined with a natural radiance.

These energy cloths are teaching volumes

Andean Cosmology is organized around the concept of inclusion. The Inka built their famous roads to bring peoples of the Andes together. They believed that with full participation there is the greatest, inherent strength.

The Inka civilization, and its smaller, component parts, were each based on four-section, equally important areas: the Tawantinsuyu. In Quechua, the language of the Inka, “Tawantin” refers to four and “Suyu” is portion or section of the whole. The entirety of Inka realm, itself referred to as the Tawantinsuyu, connotes the essence of this principle of inclusivity and fullness.

The Suyus are named, Anti, Colla, Cunti, and Chinchay. They are each referred to in reference to Cusco, the center or umbilical cord of the civilization. This is the place that feeds and receives its own nourishment from all the others.

Antisuyu – The Wild
Located in the northeast the jungle area, this Suyu represents wildness and nature in its all its glorious, untamed forms.

Cuntisuyu – Lifting/Perspective
Located to the southwest, this Suyu is the place of the Nasca Lines, where gigantic forms were traced in the sand that could only be perceived from the air. This is the place of lifting and perspective.

Chinchaysuyu – Mastery
This is the place, to the northwest, of the Inka’s final signature; it embodies the pinnacle of Inka civilization. This is the location of the Sacred Valley, of Machu Picchu, and Choquequirao. Here were left the final imprint of the Tawantinsuyu and the one least touched by the Spanish invasion.

With these Suyus as the embodiment of the Inka Experience, these people of energy,  have left a lasting impression on subsequent civilizations of the world; not in isolation, but inclusion, not dismissing differences, but bringing them to the belly of the world.